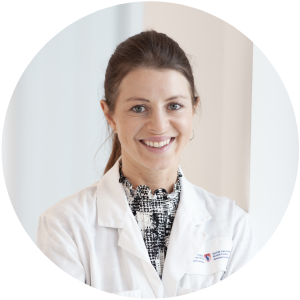 Dr. Julie Burnier, Assistant professor of Oncology and Pathology at McGill university, explains how liquid biopsies can provide critical information about Ocular tumours, including genetic signature, presence of circulating tumour cells, and other biomarkers of disease severity. Dr. Burnier discusses Uveal Melanoma, the most common intraocular tumour in adults, and how liquid biopsies are becoming front and center in the personalized management of this highly complex tumour.

After completing a Bachelor of Science Honours degree at Queen’s University, Dr. Burnier pursued a PhD in molecular and cell biology at McGill University (Experimental Medicine 2001-2005). The focus of her PhD was the molecular mechanisms underlying invasion and metastasis. Dr. Burnier went on to become a post-doctoral researcher in clinical research at McGill, where she studied the role of inhibitors of growth in a metastasis model. She then pursued her second postdoctoral fellowship at the Centre for Genomic Regulation (Barcelona, Spain, 2010-2012) with a focus on Systems Biology and Proteomics. Dr. Burnier joined the Department of Medical Oncology, Drug Development Program, at Princess Margaret Hospital (Toronto) where she focused on correlative and translational science in oncology clinical trials. In 2018, she was recruited to McGill University as an Assistant Professor in Oncology and Pathology, and a Principal Investigator at the MUHC-RI in the Cancer Research Program. In the past 3 years, she has been the recipient of numerous major grants from both government and foundations, as well as industry partners. She leads several liquid biopsy initiatives at the MUHC-RI, playing a key role in the Precision Oncology program. She has published over 40 original articles as well as a book, several book chapters and reviews, and presented her work nationally and internationally.

In my position as PI at the Cancer Research Program (CRP, MUHC-RI, McGill University) since 2018, my lab focuses on novel approaches to detect disseminated tumor molecules using biofluids (liquid biopsy), with the goal of developing both clinical applications and hypothesis-generating research to uncover mechanisms of resistance and new therapeutic targets. My laboratory focuses on identifying and monitoring the evolution of genomic changes that occur during tumour progression and metastasis through analysis of disseminated tumour-derived molecules. Moreover, we investigate the role of circulating nucleic acids and tumour-derived extracellular vesicles (EVs) in mediating tumour metastasis via communication with and reprograming of the ME. My research program is divided in two main themes: 1) design clinically feasible approaches to detect cancer development and monitor treatment response/resistance and metastasis through changes in circulating tumour DNA (ctDNA) (biomarker discovery); 2) investigate how circulating biomarkers, such as EVs, contribute to tumour progression and metastasis by modulating recipient cells (therapeutic targets).