Home » Episodes » Art beyond what we can see – Dr. John Kennedy

Art beyond what we can see – Dr. John Kennedy

BroadEye Posted on April 13, 2022 Posted in Uncategorized No Comments 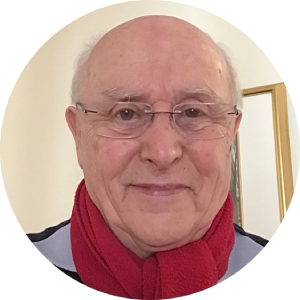 What might come as a surprise to most people is that the visually impaired can draw!

Dr. Kennedy is a Professor of Psychology at the University of Toronto and is especially interested in the theory of pictures drawn by people who are blind. The key idea is that lines in outline drawings mean the same thing to the sighted and people who are blind – edges of surfaces, such as profiles of people and corners of cubes. These shapes are understood via touch as well as vision. We also talked about how drawing kits are now made available free to all children who are blind in the US and his book on the topic: Drawing and the Blind: Pictures to Touch.

Dr. John Kennedy is from Belfast (born 1942). He went to school at the Royal Belfast Academical Institution (RBAI), and Queen’s U Belfast. He left to get his psychology PhD from Cornell, and to teach at Harvard. Dr. Kennedy then came to University of Toronto. He has always been interested in art and science, which lead him to study perception. His research topic is pictures, and how we show foreground and background.

He is especially interested in theory of pictures drawn by people who are blind. His key idea is that lines in outline drawings mean the same thing to the sighted and people who are blind – edges of surfaces, such as profiles of people and corners of cubes. These shapes are understood via touch as well as vision. Also, the sense of perspective in 3D space is the same for the sighted and blind. He often asks blind people to imagine pointing to trees on a street, some just to their side, and some far down the street. They do so well, showing they understand how depth works. Metaphors in pictures, such as Pinocchio’s nose drawn on a dictator’s portrait, mean the same to the sighted and blind. One blind child from Taiwan invented ways of showing a car moving, by elongating it, and a car stopped, by drawing the wheels as if drawn up inside the car. Drawing development is the same in blind and sighted novices. Beginners, blind and sighted, often draw patches on the surface of a object as if they were glued on the general overall shape, meaning they sketch all the little panels of a soccer ball as lots of very small circles perched on the large circular line depicting the ball.

He is working at present with Selene Carboni from Italy and Marta Wnuczko from Poland and Hsin-Yi Chao from Taiwan. His research is listed in Research Gate and in John M. Kennedy Psychologist at University of Toronto. He is a Fellow of the Royal Society of Canada, and he was a Fellow of the Wissenschaftskolleg zu Berlin. His Yale Press book on drawing is called DRAWING AND THE BLIND.