BroadEye Posted on March 8, 2022 Posted in Uncategorized No Comments 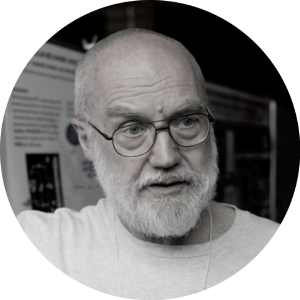 Bill Stell was born, raised and educated in the northeastern United States, the older child of art and language teachers. He graduated with a B.A. in Zoology (High Honors) from Swarthmore College and then entered the University of Chicago, where he earned a Ph.D. in Anatomy and an M.D. (Honors). During the first year of medical school he developed a passion for understanding the retina and vision. He likes to claim that the great Spanish neuroanatomist, Santiago Ramón y Cajal, was his principal teacher – that he learned from Cajal about the Golgi silver-chromate method and retinal circuitry through Cajal’s timeless monograph, La Rétine des Vertébrés (The Vertebrate Retina; 1893). In his Ph.D. thesis, Bill introduced the Golgi-EM method and used it to identify connections of rods and cones with specific bipolar and horizontal cells in the goldfish retina. After serving as postdoctoral fellow at the N.I.H., Bill joined the Jules Stein Eye Institute, UCLA, where he continued his studies of outer-retinal circuits in goldfish and produced an enduring model accounting for the main properties of color-coding in cone horizontal cells. In 1980, he moved to the University of Calgary, where he directed the Lions’ Sight Centre for many years and produced new works on retinal neuropeptides and efferent fibers. A lecture on myopia by the late Josh Wallman in 1990 led to the realization that myopia is an indicator of retinal function and malfunction, and from then on he sought mainly to understand the retinal circuitry and signalling mechanisms responsible for myopia. He was also deeply involved in research on inherited retinal diseases, such as retinitis pigmentosa (RP), through the RP Foundation of Canada (now Fighting Blindness Canada). Another favourite activity is mentoring young people, regarding science, research, careers, and life itself. He is proud to have participated in the training of a number of successful and well-known retina and myopia research scientists, including Professors Andrew Ishida, Bärbel Rohrer, and Andy Fischer, and future professors Hope Qing Shi, Brittany Carr, and Derek Waldner. Although he retired from the university faculty in June, 2020, he is still involved in research on the eye, retina, and vision, as official scientific advisor to research groups in Singapore and mainland China. His motto is, “Treat people as if they were what they ought to be, and you will help them become what they are capable of becoming” [Goethe].