BroadEye Posted on September 24, 2021 Posted in Uncategorized No Comments 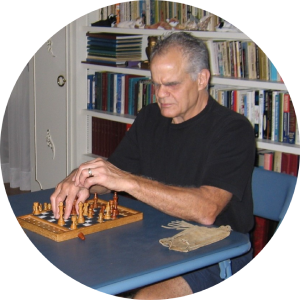 In this episode, Jim Thoune describes his journey from a young boy who lost his vision due to Retinoblastoma to becoming a world class blind chess competitor. Jim discusses highlights from his career, how parents can help their blind children succeed, his passion for scuba diving, and much more.

Not a blind man, but a man who happens to be blind as well as five feet 8 inches tall, with gray-white, curly hair and a medium build. Totally blind since age 5 due to Retinoblastoma, I am a 71-year-old retired Government employee, where I divided my time almost equally between programming computers for the Office of Naval Intelligence and trying to help people with tax issues as a Customer Service rep for the IRS. But my background also includes a Master’s degree in Sociology, which I applied to the Social Services field for ten years. I’ve been a baseball nut and Chicago Cubs fan since age 10. I’ve been a tournament chess player since 1973, playing in numerous clubs and tournaments around the country. Also in 1973, I became the first totally blind person to be certified in the US as a SCUBA diver. After retiring from Government service in 2014, I resumed and intensified active tournament chess competition, and now have three National Blind Chess Champion titles to my credit, earned in 2015, 2017, and 2018. In 2016, I got the opportunity to teach two entry-level chess courses to blind individuals as an adjunct instructor for Hadley Institute and did so for three years. I currently coach beginner and intermediate chess players. For fun, I divide my time between reading, chess, travel, some fitness, a little writing, (A couple small publications), some building, and working in my yard. Finally, just a word or two about those chess titles. I am not the best blind chess player in the country. Far from it. But I got my chess titles, and I got my diving certification, and i got a bit of my writing published, because I showed up and tried it. As blind people, I believe we need to pay particular attention to the reality that if we don’t put ourselves out there and try, we won’t get anywhere. My Mother taught me, and sometimes prodded me, to accept that blindness wasn’t going to take away my ability to learn or to do things. It was just going to make me find different ways to go about learning and doing. She swallowed her anxieties and taught me, dared me, to venture out and explore. And she imparted to me the stubbornness to try and try again, a trait which has proved useful in various ventures, and particularly in the game of chess.